I walked a path, dark and haunted,
On corners, dark skinned angels flaunted
And sold their wares to the weak of soul
With eyes as bright as blackest coal
Lustful gaze; pouting lips, bleeding
Nether voids filled, shame receding
Yet, from that sin, a scent – sublime,
The scent of sex once lost in time

Bottomless, the cave, with seed I flood,
Bounteous, her bosom, with pert rose bud
Nipples. And thighs, like valleys of hidden pleasure
To the dewy oasis, mans ultimate treasure

Tangled, her locks, of sunlit and gold
As skin, I kissed to her womanhood wold;
Releasing her seas that endlessly aspire,
In torrents, to boil in the coals of desire
Lakes that endlessly outspread
To laviscious shores, and perfumed breaths
Ripples of pleasure unwind to the shore
As we came, as a choir, to carnal rapport

Folds of flesh, that now outspread
The coming together, our union of death
One moment of rapture, a hint of pure bliss
What gift from Heaven, shaped like she is

Whispering softly, she bade me adieu
And kissed gently. While around us, bodies were strew
In the forests and highways, from puddles to sea
Saw I, a million angels, alas, not one as she
E’er by the caves of blackest night
Ghouls and demons, fought to buy
The souls of lost and most unholy
The tarnished, by their melancholy

I met a vendor along the way
Selling memories of a time, long past
Shrouded forms, lost souls at pray
To Demons and Gods, Iconoclasts
White-robed fiends; phantasmic Beasts
On sullied earth, as lakes, men weeped

Angels left in swarms, nay, legions
Leaving man, sweet bitter treason
To ghouls that amass in shadows
While God laughed high, and Satan prospered
But we, mere travellers upon the road
May not, not ever, succumb to hope
Never do lifes mysteries, to us unfold
Lest we see with eyes wide closed
Or welcome nights sweet bitter passage
The idol of our vassalage
Be it so, that here, our heavy spirit passes
Behold it’s beauty, through darkened glasses

Here, under the warrior known as night
We learn to walk, to stand, to fight
And we have wandered through lifes stages
Men in Sin, and prospering Angels….

A whisper, a breeze, as the day withdraws
Into the dark, to be reborn
And night begins its subterfuge
Upon the minds of me and you

Creaking trees serenade the night
Veiled in ghostly pale moonlight
Their moaning limbs stretched, scratch the sky
As yesterday limps off to die

Under the moth eaten veil of night
Spying stars betrayed by their own light
A moon, that silver warrior, bold
A star unto which our wishes, sold

Dreaming eyelids flutter, dance
Taken by a dream romance
A chance, a glimpse, of happiness
Perchance to dream, what life is this?

We hide behind our dreams, our lies
To give some meaning to our lives
Lost inside our own abyss
Here, Only Pain Exists

From the shadows, to enter horror
The face of man is the masque of death
Drown all hope with the anchor of Faith
To sleep, dormant, in immortality
But when, should we, return again
The world be ours for the breaking

Under daylights waning light,
Succumb I, no more, to vengeful night,
Content within earthen room, nay door
Learned and feeble alike, are trod upon
Collected wisdom, now astray,
Taught not, of death, nor his callous ways.
But seek I, a truer path, and go
To learn the lessons taught below.

See the dark crushed velvet skies!
Where starlit diamonds capture minds,
And softly, softly, Diana glides
To yonder shores, Oh how she rides!
To where the slumbering lie still,
Breathless lungs, ne’er again to fill
Where once again, under twilight show
Souls fall to earth as virgin snow
The ground on which the righteous walked
Of good or evil, it now baulks
Leaving behind, as stoic knaves
In Mother Earth, begotten womblike graves

Across the satin sheen of night
Vivid dreams that dance like sprites
There, in their nonchalent state
Mere men accept the hand of fate,
But think you, walking on named stone
The granite quilt of aged bone,
“Once lived they, their history told,
As mine shall be, e’er carved in stone.”
Those graves, those citadels of sleep,
That womb of earth that holds them deep
Down in her soiled womb to roost,
Forevers sleep, life induced.

Those stoic stones, ‘pon, carved a name
The rotting corpses claim to fame
Our lovers, friends, in sad decay
Though their legacies may never fade
But what are we, a race of wandering souls
Men, half ambitious, all unknown.
Stone sentries, watch with unblinking eye,
Those vaults in whom our history lie,
Where angels cry their tears of stone,
In a copse of epitaphs and bones

But we, mere fools, of altered state
Praise the rich, adorn the great
But they too, succumb to death
E’er fame diminished, ‘pon final breath
On, before my eyes, beauty fades,
A swift unveiling of pastel shades
In dying flowers and mourning shrouds
And azure skies and cotton clouds
But harken to the sobering cry,
“Think, poor fool, what it’s like to die….”

In shrouded funerary parlance,
Speaketh he, of ill conscience
Think I, I hear the corpse chagrin;
(Yon women, halt thy whimpering!
Time, to him, hath meaning not
Smothered by the midnights rot)
Thus spake they, in dulcet groans,
Akin to songs of dusty bones.

“When, of breath, man is forsaken,
Recounts he, the path he’s taken
They, like me, recall past things:
Love, lust and forgotten dreams
But fools are those who’s fear prevails
Above the Angels, and Son of Israel
Death’s ‘pon a path that all must tread,
If he were to God, imbed.
A silent night, a whispering wind,
Death is the lover, not the fiend.”

“But why? Why must Death, our life steal
Leaving mourning o’er nights, eternal?
E’er we are torn from life as nefarious weeds,
‘Pon palls of black and funeral steeds.
For though each man might, to God, implore
He cannot live forever more”

‘Las, neither can the dying know
The loss they feel, their tears of woe.
The soul, who in fleshy prison, dwelt
Knows nothing of what the body felt.
When lifes final years are run
Through winter rains or glittering sun:
Such joy though far transcending sense,
When old enemies make new friends.
But once in earth, the body is placed
A mans history is thus debased
Malignant fears are cast aside,
Along the ever turning tide
For all the friends along the path he chose,
Each man must face death alone….

Or So I’ve Heard It Told

Sleep, that gentle warm cascade
Nocturnal sanctuary we so crave
Was the start point of a story of old
Or so I’ve heard it told

Hoofbeats pounded in the fog
Drowning out the call of dogs
Who howled at this, impending doom
Underneath the Huntress Moon

Terrified eyes peered beneath the sheets
Trying to hide from the monstrosity
Shadows take form, body and voice
Hungry for dreams, devouring joy

Riding his nightmare, nostrils flaring red
Hunting down children, with eyes of dead
Into the yonder, ne’er to be seen
Sold to oblivion, they still scream in our dreams

Captured, imprisoned by our fears with a face
Endlessly running in another pointless race
The moral of life, or so I’ve heard it told
Living is the prison that finally breaks the soul

And into vacant yonder pass
I stared, as into the abyss
Defiled the purity of my soul
And took the monsters hand

Over bloodied fields we strode
Over rotting Corpses, rode
Looking for humanity
Across oceans tainted red

Noble or pauper, all were deceased
By Faith, by Colour; by naught more than greed
Buildings of worship, now smouldering ruins
Under midnight’s dark facade

I stood, aghast, at what I’d seen
Visions of hatred, war; the obscene
To the beast I turned, answers demanded
The abyss had shown me Man

Happy Birthday to the King #StephenKing

The author has given his perso 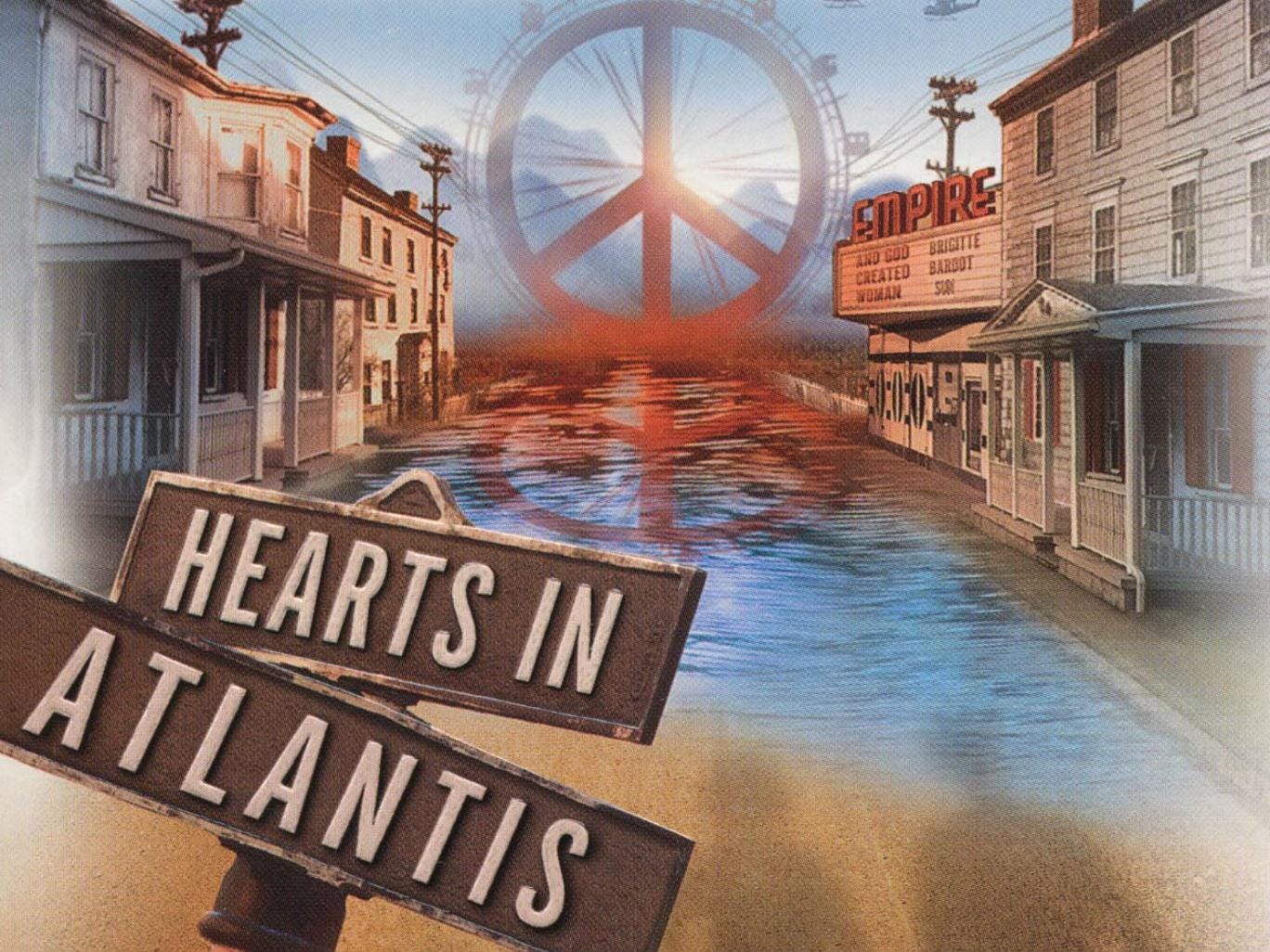 nal approval to the project.

It’s a wonder the works of Stephen King hasn’t been exhausted considering how many film adaptations exist.

Still, it’s rare that one of his properties is revisited when it’s already been adapted – but that’s exactly what’s happening with upcoming film Hearts which will serve as a fresh take on King’s novella Hearts In Atlantis.

The collection – released in 1999 – is comprised of two novellas and three short stories; the film will focus on the titular tale which follows a group of college boys who experience their first time away from home in 1966.

Popular author Stephen King will open the Main Stage of the 2016 Library of Congress National Book Festival with a presentation and recognition of his lifelong work promoting literacy. Tickets will be required for the King presentation.

Tickets will be free and will be issued electronically beginning Sept. 14.

Tickets are not required for other presentations or activities at the festival.